Interview fails: What to learn from 5 bad media moments 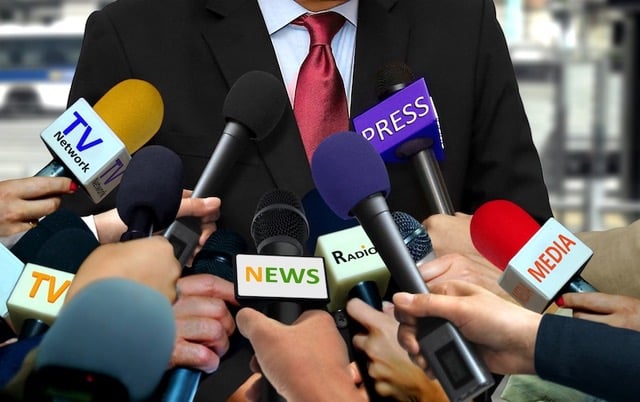 For those unacquainted with having a recorder in their face, a reporter rattling off rapid-fire questions at them, or the lights, cameras and uncomfortable actions of the media directed their way, giving interviews might be as overwhelming as they can be irritating.

Still, if you’re a high-ranking member of an organization, a politician or simply a person making the news — be it for the right or wrong reasons — it’s unavoidable. A spokesperson won’t always be the appropriate representative to meet with journalists. You’ll need to be prepared to meet with the media.

Some of the more famous missteps of years long gone and even the recent past give us a chance to learn, though. Let’s take a look at five bad media moments, as well as the lessons to take from them.

Sit in on an entry-level mass communications class, and you’re likely to hear about the September 1960 presidential debate between John F. Kennedy and Richard Nixon — or, borrowing some commentary from Chicago Mayor Richard Daley, the time Nixon got on camera looking like “they’ve embalmed him before he even died.”

That night in Chicago 70 years ago may have been the Garden of Eden for American politics’ relationship with television. Indeed, it was a beginning — and some might say it was the original sin that sparked a climate that places presentation over substance. At one podium, you had a young, tanned, charming and relatively inexperienced JFK. In the other, you had a gruff, very recently flu-ridden and sweating-under-the-hot-studio-lights then-Vice President Nixon.

The difference was noticeable — but not audible. After the debate, the majority of the 70 million television viewers said they felt Kennedy won the night. However, the radio listeners thought the debate was either a draw or the more experienced Nixon was the winner.

In the end, both candidates were sweating it out on election night — but we know how the race ended. And we know that anyone — politician or not — who is about to step into a studio needs to have their appearance buttoned up. Of course, stylists and makeup artists won’t save everyone. Just ask Nixon.

Probably the only thing messier than the worst marine oil spill in history was BP’s response during the first weeks of the disaster and its aftermath. CEO Tony Hayward’s series of gaffes would almost be humorous, if it wasn’t for the tragic fact that 11 people were killed in the explosion on the Deepwater Horizon oil rig, as well as the slew of environmental consequences that were a danger to wildlife and humans alike.

Hayward’s PR mistakes ranged from dodging blame (“Well, it wasn’t our accident…”) to minimizing the effect from millions of barrels worth of oil gushing into the Gulf of Mexico (“…the impact of this disaster is likely to be very, very modest.”) The absolute lowest moment of this parade was probably when he claimed he was suffering as much as anyone and just “would like my life back.”

Look, try to give him the benefit of the doubt here — you’d have to be particularly reprehensible to claim you’re suffering and mean it when the families of 11 people who were working on a platform operated by your own company are still grieving their deaths. Hayward’s remark was probably unintentionally careless, but it was a horrible look and spoke to a broader point.

Most companies will face a crisis if they’re around long enough, and most crises probably won’t include the loss of life or an environmental catastrophe. Regardless, all businesses should have a crisis plan in place, one that includes consistent messaging that is delivered with the care the situation demands. In this case, by the time BP finally got around to saying sorry, the damage had been done in far more ways than one.

There’s nothing like live TV — or three anchors doing their damnedest to squeeze interesting answers from a completely uninterested guest.

In this clip from 2015, actress Cara Delevingne joins a morning show in Sacramento, Calif., via satellite to discuss a new movie. It went … oddly. Delevingne appears uninterested throughout the interview, looking away from the camera and rolling her eyes at other times. You’d think the crescendo hits at the 2:00 mark of the video, when one of the interviewers flat out asks if she’s tired, but 30 seconds later we get a passive-aggression battle for the ages as a different anchor says, “you do seem a bit irritated, perhaps it’s just us.” Delevingne, fully over it at this point, suggests they might be right as the interview ends abruptly.

The incident went viral for a bit before the world moved on, and it wasn’t particularly damaging for Delevingne — celebs have that kind of leeway. The rest of us don’t. If you’re openly hostile or merely dismissive of the media, it hurts not only your personal brand, but that of whatever company or institution you represent. So, even during days you just don’t have “it,” put on your best face.

Our most recent example is already one of the more infamous public relations disasters to strike the British royal family — which is saying something.

Prince Andrew, the Duke of York and third child of Queen Elizabeth II, had long faced criticism for his friendship with billionaire sex offender Jeffrey Epstein and even been accused of sexual abuse. In November 2019, he agreed to a BBC interview

For Prince Andrew, even a flawless interview likely would have had trouble changing minds or repairing his public image — but this interview came across almost aggressively and intentionally tone-deaf. He contradicted previous statements, showed a distinct lack of empathy for victims, at times glowingly recalled his friendship with Epstein, and waved away an accusation by claiming he is unable to sweat (really, he said that).

It’s easy to play the “coulda, shoulda” game here, but one would think Andrew would have come in with, at minimum, a basic understanding that an arrogant performance such as this would take a sledgehammer to the royals’ reputation and image. In the big picture, of course, that matters far less than the crimes committed and alleged to have been committed by all figures caught up in the Epstein story.

Perhaps, then, the fault lies with the royal family for even agreeing to let Prince Andrew do the interview. Read the room — the response demanded better than this.

Lock out distractions (even adorable ones)

Let’s stay in the U.K. (and yea, our past four examples have featured Brits, so maybe it’s a theme) and lighten the mood a bit.

Few viral videos in 2017 were as funny as the moment a BBC interview turned into child’s play. In what may be the most entertaining discussion of South Korean politics ever, professor Robert Kelly’s video chat was interrupted as his young daughter bounces into his office, followed by his baby son rolling in with his walker … followed by his frantic wife scrambling to corral the kids and yanking them out of the room.

The moment went worldwide in a matter of days, thrusting the family in a spotlight that was mostly polite. Of course, Kelly suddenly was more famous for being That Guy Whose Kids Were Hilarious in the TV Interview than being an expert on the Koreas.

What’s the takeaway here? If you’re about to give an interview outside of the studio, mind your surroundings — and lock the door.

“Lock it up” might be the most appropriate way to describe anytime you’re about to meet with anyone in the media — be it on television or for an interview at a coffee shop. Presentation is just as important as the message — and the message is everything.

That much hyperbole in one paragraph might be intimidating, but everyone can learn to be good in front of a camera. Like most skills, it just takes practice. At WordWrite, we offer comprehensive media trainings that include simulated interview sessions in a real-life studio. And the great thing about trainings? If you have a bad media moment, you can just try again.

Gary V: Why storytelling matters in business and social media